by Muhammad Abdullah
in Tips and Tricks
0 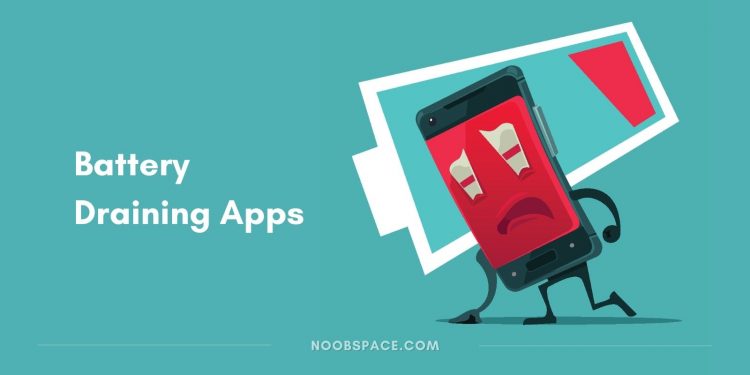 An illustration of low battery in a smartphone / Licensed Image

Gone are the days when we used to have smaller batteries, and it used to take hours to recharge them. Today, smartphones have large batteries, but the high-quality display and high-performance chipset can still drain them faster. Some apps can drain your smartphone’s battery faster than ever. If you cannot identify these apps, we will help you figure out which apps are consuming more battery.

These are the top battery draining apps that we found in our tests:

Facebook is one of the most battery-hungry apps that I’ve ever used. It takes the most battery in my experience. It not only takes video while using the screen but also uses more battery in the background. To tackle this problem, there are a few things that you can try.

How to fix the Facebook app battery drain problem?

To fix this issue that has been caused by Facebook, you can either try Facebook app’s lite alternative or you can just force stop the Facebook app and limit the background activity. This way, the app won’t take background resources and results in less battery draining.

Facebook Messenger is one of our best free video chat app. You can use it for chatting or video calling for FREE, but comes with a cost.

Facebook itself is the top battery draining app in Android and iOS. Messenger holds second spot with background usage and activity. It not only just drains battery but also affects a phone’s performance. If you’ve a mid-range smartphone, Facebook Messenger would be a nightmare for you. That’s why there’s a Messenger Lite app available, which you can download from Google Play Store. It’s much lighter and consumes less RAM as compared to Facebook Messenger.

Well, just like any other app, Messenger keeps functioning in the background, which makes it a massive RAM consumer. The best way is to close the background activity of the app. It’ll just kill the background process that app uses to notify you about new messages. There’s one more thing that you can turn off to make it better, the floating bubble messaging.

Instagram is also one of the biggest battery draining apps. If you haven’t forced closed it or restricted the background data of Instagram, it will surely consume most of your battery in the background. And if you are an Instagram addict who can’t get your hands off your phone because of this social sharing app, then it will be the biggest battery eater in the foreground.

How to fix the Instagram app battery drain problem?

No matter how hungry Instagram can get for your smartphone’s battery, there’s always a solution. You can either restrict the background data of the app or download the lite version of Instagram from Google Play Store if you’re an Android user.

How to fix the Snapchat app battery drain problem?

You can fix this battery draining issue by force-stopping the app after use or restricting background activity. But it will stop notifications and you might not get updates from your friends immediately. So, choose wisely. Also, Snapchat is also the best free app for video calling.

Camera apps are one of the biggest sources of draining batteries in smartphones because they’re using multiple parts of a phone at the same time. Camera sensor, processor, display, and flash, these

How to fix the Camera apps battery drain problem?

Use the stock camera app; it’s optimized to work with the OS compared to the third-party apps. Make sure you lower the brightness and not turn on mobile data while using the camera. Using mobile data and a camera simultaneously increases the temperature of the phone and battery, hence resulting in battery drain. Remember, high temperatures are also harmful to the battery as well.

Off-course the streaming apps like Netflix consume a lot of battery power. Since it involves the screen, audio, notifications, and internet usage, hence, more battery juice will be consumed. There’s nothing much you can do to lower it, however, here are a few tips you can try.

How to fix the Netflix or streaming apps battery drain problem?

Some of these tips might not be possible for you, but following these tips significantly lowered battery consumption for me.

TikTok is the most popular short video format platform which is crazy popular among teenagers. It is the fastest-growing app and has reached 1 billion in the fastest time, beating YouTube and Instagram. However, the app can drain battery juice from your phone pretty fast.

Also read: Latest TikTok Tips and Tricks You Should Know in 2022

Due to its video factor, the app uses to display, audio, internet, as well a a camera in some cases. This makes TikTok like Snapchat or Instagram, making it one of the highest battery draining apps. In addition, it shows plenty of notifications, making it battery hungry in the background as well.

How to fix battery draining because of TikTok?

Make sure you’ve turned off unnecessary notifications from the app. If you don’t need notifications or any updates, turn off the background processes of the app. Limit brightness while using if possible, and make sure you’re connected to Wi-Fi because data connection drains a lot of battery. If you don’t have Wi-Fi, then you can use a Data connection, but at the cost of your battery juice. Or maybe you can uninstall TikTok from your phone and start using TikTok on PC?

I’ve been warning people, and I’m going to say this again. RAM Boosting apps are a SCAM! There, I said it. You might ask, why? Well, these apps are for free, which means they come loaded with Ads and a premium version with more features. They might kill other apps, but they do consume more battery because of their consistent notification service, background activity, and constant advertisements. Instead of cleaning the RAM and saving the battery, they just become worse.

Just don’t install any RAM booster or battery booster app. They’re probably scams. However, you can use apps that can freeze the background activity of your RAM-hungry apps without affecting your battery life. The app I recommend is Greenify. If you’re a root Android phone user, it’s a gem for you. Though it also works without root to save battery life and freeze app operations in the background.

I use Face Unlock in my Android phone, must be surprised, right? Well, it’s faster than me putting a finger on the back of the phone every time I want to unlock my phone. And also, sometimes, my hands are occupied, so it’s better if I can just unlock my phone by only looking at it. But here’s the thing, I just recently checked my battery consumption and found that Face Unlock was in top 5 among battery draining apps in my phone. So, if you’re using Face Unlock, you need to know it drains your battery. If you want to stop battery draining and prioritize it over Face Unlock, then you can turn the Face Unlock off.

A service that is required in Android smartphones to run Google Play Store is Google Play Services. It is must for every Android smartphone, without it, Google Play Store doesn’t work. GP Services app comes pre-installed in Google approved smartphones, however, in new Huawei smartphones, you won’t find GP Services app by default after U.S ban on the company. This app is responsible for battery drain in most Android phones, since it keeps running in the background. You can also take a look at your phone’s battery stats by going to Settings > Battery > Battery Usage. Turning background activity off or force stopping this will only affect your phone usage, since your Android smartphone heavily relies on this app.

How can I tell which app is killing my battery?

The answer is simple. After a day’s use, go into Settings > Battery > Battery usage. You’ll see a graph with a list of the most used apps below. There will be a percentage number next to it.

Well, it depends. If you’re logged out of the app, or it’s disabled, then chances are an app can’t drain your battery. An application will always work in the background if you’ve already set it up. At least a little bit.

How do I stop apps from draining my battery?

Which apps drain the most battery?

Why are apps draining my battery?

Why is my phone battery suddenly draining so fast?

Does turning off background apps save battery?

Wrong. In the last week or so, both Apple and Google have confirmed that closing your apps does absolutely nothing to improve your battery life. In fact, says Hiroshi Lockheimer, the VP of Engineering for Android, it might make things worse. Really that’s all you need to know.

Does closing apps save battery?

Wrong. In the last week or so, both Apple and Google have confirmed that closing your apps does absolutely nothing to improve your battery life. In fact, says Hiroshi Lockheimer, the VP of Engineering for Android, it might make things worse. Really that’s all you need to know.

So, these were the top battery draining apps for Android and iOS. I’ve mentioned a few in this article, but in your case, it can be different apps. If I’m missing something, do share in the comments below and I’ll keep this article up to date.

I'm a computer scientist, technology geek, and a movie enthusiast. A serial digital entrepreneur, aka abdugeek — founder of GameBird Media and co(s).