by Muhammad Abdullah
in Smartphones
1 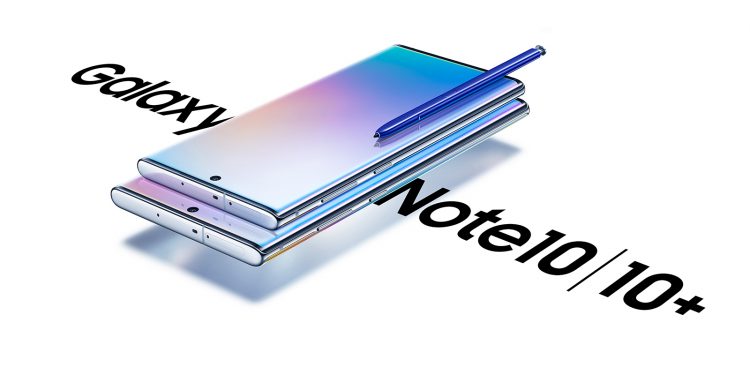 Samsung smartphones have been on top of other smartphones for their powerful hardware specs, and this time, the Galaxy Note 10 and Note 10 Plus are no exception. The company released two of their flagship phones with monstrous specs and appealing display. They are big, improved, and in a way, disappointing as well.

At the Galaxy Note Unpacked 2019 event, the company announced not only two but three new phones, a Galaxy Note 10, Galaxy Note 10 Plus and Galaxy Note 10 5G. The new lineup will be available to buy on August 23, 2019. Here are the key specs of the phone:

Galaxy Note 10 and Galaxy Note 10 Plus are rocking 6.3″ and 6.8″ AMOLED display but with different screen resolution. The smaller Note has 1080p display while the Plus version has a 1440p resolution display. The screen is almost bezel-less with a hole-punch camera in the top center.

It looks the same S Pen, but the insides are different now. Some of the S Pen features will make the wielder a wizard. The new S Pen comes with a gyro and accelerometer sensor, which makes it like a magic wand. It also has new gesture that you can use to do certain things without physically touching your phone. You can take selfies, switch cameras and do more with the new S Pen. Samsung also says that in the future, the SDK will allow developers to use this feature in their apps.

The camera in Samsung phones has always been the apple of everyone’s eye (except the selfie camera). This time, Samsung is bringing triple camera sensors along with a depth sensor (for Note 10 Plus). The rear cameras have a resolution of 12MP, 12MP, and 16MP. There’s a selfie camera of 10MP in the hole-punch display. The cutout is smaller as compared to the ones on the Galaxy S10 and S10 Plus.

Galaxy Note series has always been the powerhouse of Samsung’s flagship lineup, and these Note phones are not any different. They’ve cutting edge specs to deliver top-notch performance. Galaxy Note 10 has a Snapdragon 855 processor and 8GB RAM. The Plus version has 12GB RAM with storage of 512GB which can be extended up to 1TB with a 512GB microSD.

Talking about the battery, Galaxy Note 10 and Note 10 Plus have 3,500mAh and 4,300mAh sized batteries respectively.

The new flagship phones are running on the latest version of Samsung’s OneUI on top of Android 9 Pie.

The Bixby button is now removed and is now available with a long press of power button. It is annoying to not being able to turn off your phone with long-press anymore. Samsung did offer a power-off option in the notification panel.

Galaxy Note has always been Samsung’s power phone, and once again, Samsung is bringing their best in this lineup but with some setbacks. The biggest set back is that the headphone jack will no longer have any place in this Galaxy Note smartphone. Yes, the headphone jack in the Galaxy Note is no more, and it’s gone. From now on, you can either use wireless earbuds or a wired USB Type-C headphones to listen to Music.

The disappointing decision was made after Samsung trolled Apple for doing the same things for quite a few years. Samsung said that the headphone jack was removed because they didn’t have any space left in the new Note series.